Colleges
High School
Menu
High Schools
Colleges
Install the app
You are using an out of date browser. It may not display this or other websites correctly.
You should upgrade or use an alternative browser.

OU Women win the national gymnastics semifinal, and compete for the natty, Saturday at noon

They trailed Utah after the first rotation, after a less than stellar performance on Vault, but they took the lead with a solid Bars rotation, the second of four, and beat Utah by .4. Both teams advance to the finals. Minnesota and Alabama finished 3rd and 4th, ending their seasons. The other quad semifinal is tonight. Florida and Michigan are expected to advance.

The PDF of the meet results: 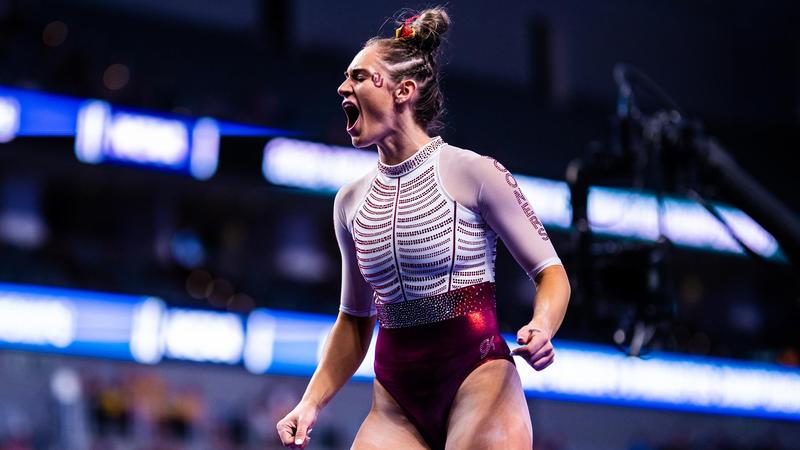 At this very moment, Michigan, defending National Champs are in 4th position out of 4 after 3 rotations. Auburn and Florida are showing strong. OU looks very good going into Saturday. Commentary provided by my wife! She knows gymnastics.
Reactions: iasooner2000

OU, Utah, Florida and Auburn it will be.
Reactions: iasooner2000

They came back from a slow start to win another championship.

Poor start on the floor and an excellent series on the vault put them in the lead. They showed heart and spirit.
Reactions: iasooner2000 and LAY THE WOODY
P

Florida trailed by .2 heading into the last rotation, and they were on Floor, their strongest event. Trinity Thomas, their star. scored a 10 on Floor Thursday and repeated on Saturday. She was strategically next to last in their rotation, so the crowd reaction could have impact on opponents, especially Regan Smith on Beam, the trickiest event. The Florida crowd was screaming for a ten, about the time, Regan started on Beam and exploded in noise when the 10.0 was announced.

Smith, whose heel, barely scraping out of bounds on Floor, might have cost OU the meet. Instead, she nailed her Beam performace, scoring a 10 on two of six judges cards. It sealed the national title for the Sooners.
Reactions: LAY THE WOODY and iasooner2000
You must log in or register to reply here.

Friday, a great day in athletics for OU women